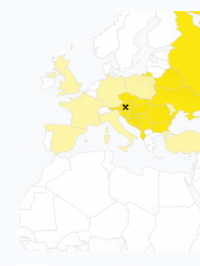 Raiffeisen Bank International (RBI) considers its domestic market of Austria, where it is a leading corporate and investment Bank and Central and Eastern Europe. Its subsidiaries covering 12 markets in CEE. In addition, the Group comprises numerous other financial service providers active in areas such as leasing, asset management, mergers and acquisitions.

The regional Raiffeisen banks hold about 58,8% of the shares, the remainder of shares are in free float. After the merger in March 2017 with Raiffeisen Zentralbank Osterreich AG (RZB), the former main shareholder of RBI has acquired all the rights, obligations’commitments and functions are transferred from the company RZB AG, in their entirety. In particular, it performs the role of the Central institution of the Austrian Raiffeisen banking Group.

The top management of RBI

The Principles Of The Raiffeisen Group

Guidelines for Ethical Marketing in RBI

Internet banking for business entities
How can we help you?
For example: